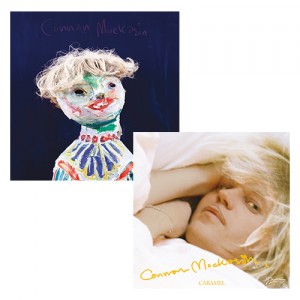 Mexican Summer is delighted to announce the release of Connan Mockasin’s debut LP Forever Dolphin Love for the first time ever in North America. Originally released in 2010 (under former title Please Turn Me Into The Snat), Forever Dolphin Love remains a vital introduction to the strange and fantastical universe of Connan Tant Hosford. Following its release on Erol Alkan’s Phantasy label, the New Zealand-born songwriter enjoyed a flurry of critical and artistic praise from the likes of David Byrne, Johnny Marr, Blood Orange’s Dev Hynes and Charlotte Gainsbourg, with whom Connan is an ongoing collaborator. In addition to touring as Gainsbourg’s live band, Connan has also toured in support of Radiohead and Crowded House – both of which have provided a much larger platform for this off-kilter rising star.

There’s a truly mercurial quality cast over Forever Dolphin Love. Much of this can be attributed to its production, which floats and flows with an organic bedroom sensibility, creating a delicate environment for Connan’s helium-inflected vocals. But the songs themselves are equally captivating – full of wormy vignettes, druggy detours and subtle idiosyncrasies that gradually reveal themselves after repeated listens. Tracks like “It’s Choade My Dear” and “Faking Jazz Together” are perfect slices of light-headed psych pop, constructed around spidery hooks, pitter-patter percussion and slow, sinuous grooves. Opener “Megumi the Milkyway Above” and closer “Please Turn Me Into The Snat” inject some dynamic variation – the former with a jazzy, samba-like shuffle and the latter with shouted, melodramatic vigor. The title track acts as the album’s centerpiece – an ambitious suite that clocks in at over ten minutes; slithering through funk-filled interludes and lush passages into one of the album’s most frantic and memorable hooks.

Completing the experience are Connan’s lyrics; a mixture of absurd storytelling and hypnagogic whimsy that imaginatively tie into the album’s loose concept about an anthropomorphic dolphin. On live favorite “It’s Choade My Dear” he sings: “I’m a China toad, but I’m in filing mode / please take it off / I have four arms to see things through, for fetching food so we can’t stop…”. This might all be a little forced in someone else’s hands, but Forever Dolphin Love exudes a genuine weirdness that is fully realized in all aspects, particularly in its charming videos. Even the album sleeve, which features surrealist paintings by Connan, feels like a perfect reflection of the music inside, and indeed, of its auteur-like creator.

Forever Dolphin Love will be released on November 25, 2014 in LP, CD, and digital formats

Some musicians know where they’re from and where they’re going, and why. Others, such as Connan Mockasin, can only work from instinct, not only disinterested in the bigger picture as unable to see it. Take Mockasin’s first album, Forever Dolphin Love, which he only wrote and recorded because his mother suggested it. Or his new album Caramel, triggered because he liked the onomatopoeic quality of the word, and the music and words just followed.

This helps explain the evolution from the labyrinthine, oddball-psych of Forever Dolphin Love to Caramel’s equally inventive and unique brand of mutated, lustrous soul, almost wholly self-recorded over a month in a Tokyo hotel room. Mockasin remains what Clash Music called “a true cosmonaut of inner space” but the new album explores different regions of his galaxy, not just soul but a liquefied brew of blues, funk, ambient and folk with pronounced Oriental and Gallic timbres, all laced with an uncanny air of bliss.

Oh, and it’s a concept album. Of sorts. “The concept is that it's actually an album,” says Mockasin. “It starts with the dolphin [from the debut album] leaving, and the boss (the man) who is so in with love with the dolphin is sad, and then it kicks into the new album, and he is happier. But there’s a car race and a crash…”

In track terms, Mockasin’s narrative starts with album intro ‘Nothing Lasts Forever’, shifts to ‘Caramel’ and later on, crash-emulating guitar shrieks that constitute part three of the five-part ‘It’s Your Body’. Part four, however, is all tranquil and Zen. “That was when I heard my friend was dying and I felt sad,” Mockasin explains.”It’s just ideas in my head that I put together, and later on it might make more sense. But I don’t think about the meaning at the time. Or I’m not aware of it.”

Mockasin is also unaware of the possibility that Caramel has hints of Scritti Politti’s exquisitely stitched soul, or of Prince - if the Minneapolis legend had spent time in Canterbury, the learned epicentre of South East England’s progressive psychedelia during the late ‘60s and early ‘70s, where the likes of Syd Barrett and Kevin Ayers began their own musical journeys. “Prince goes to Canterbury, that’s a good one!” Mockasin retorts. “Maybe Caramel is a little bit soul. Maybe it comes a smidge more from hip hop, which to me sounds much fresher than what’s called ‘indie’. Sometimes I’m ashamed to be in a band, or a musician, at this point in time.”

Being a musician has always been a vexed issue for the man born Connan Tant Hosford in Te Awanga on the east coast of New Zealand’s north island. Hearing his dad’s Jimi Hendrix album set him on a course to play guitar, “to be the best in school,” he recalls. “I was obsessed. But I went off music during high school, and I wanted nothing to do with guitar. I didn’t even want to be noticed. Maybe that was puberty.”

Instead, the teenage Connan got a welder and built his own version of carnival rides and beach vehicles, and surfed, until high school was over, “and music came back.” One of his formative bands was Grampa Moff (also a track title on Forever Dolphin Love) but it was Connan And The Mockasins (named by a friend after Connan’s hobby of making moccasins out of sheepskin and motorbike tyre) that first made a mark, when the quartet decided to try their luck in London in 2006. Without friends or contacts, they initially slept on park benches (luckily it was a great summer), but once settled, and with bar jobs, they found interests from record labels, but Connan backed out of an album deal. “All labels we met with began by saying we could record any way we liked, but then started saying, ‘use this studio, with this producer’…I could see where that was heading.”

Disillusioned with the record industry, and the limitations of a band set-up, Mockasin returned, alone, to New Zealand. “I decided to do nothing, or nothing to do with music. But my mum said I should just make a record. I didn’t know how to record but we had a few tape machines lying around the house, so I did. I didn’t expect to release it, just wanted to make a record I liked, for my ears and my mum’s.”

With renewed passion, Mockasin retained the band name as his new surname because he liked the sound of “Connan Mockasin” and self-released his own mum-triggered album in 2010 as Please Turn Me Into the Snat.

Mockasin returned to the UK before discovering that DJ/producer Erol Alkan had discovered the album and wanted to make the first release on his new Phantasy Sound label. The album was re-released, under the new title Forever Dolphin Love after its magnificently meandering ten-minute centrepiece.

Ecstatic reviews followed, alongside live shows, where Mockasin would eschew set lists, “so that it felt new every time we play. The band has a couple of rehearsals to begin with, but we don’t practise after that. I’d rather follow the mood of the audience… playing the same songs in the same way, every night, would be so boring.”

Mockasin was about to record what became Caramel with his band when he rushed home when his father was suddenly taken ill. In the aftermath, he decided to retreat to Tokyo - whose aura can be heard in tracks such as ‘It’s Your Body (Part Five)’ and the chatter of young Japanese voices dotting the album, adding more levels of intrigue and imagination. “Too much of the music that I do get to hear, I find too aware, or processed,” he says. “I just want to capture the first idea I have, which is always the most mysterious and attractive part.”

If Caramel wasn’t enough, Mockasin has also been writing more material for Charlotte Gainsbourg after penning the exquisite ‘Out Of Touch’ for the actress/singer’s 2012 mini-album Stage Whisper. Connan was already popular in France – “it felt like they immediately understood what I was doing” – and their ongoing collaboration will only endear him more to the French. It’s another sign that Mockasin is going places, but at his own pace, just as Caramel suggests the process of melting and taking on a new shape, a new taste. That is the true sound of Connan Mockasin.